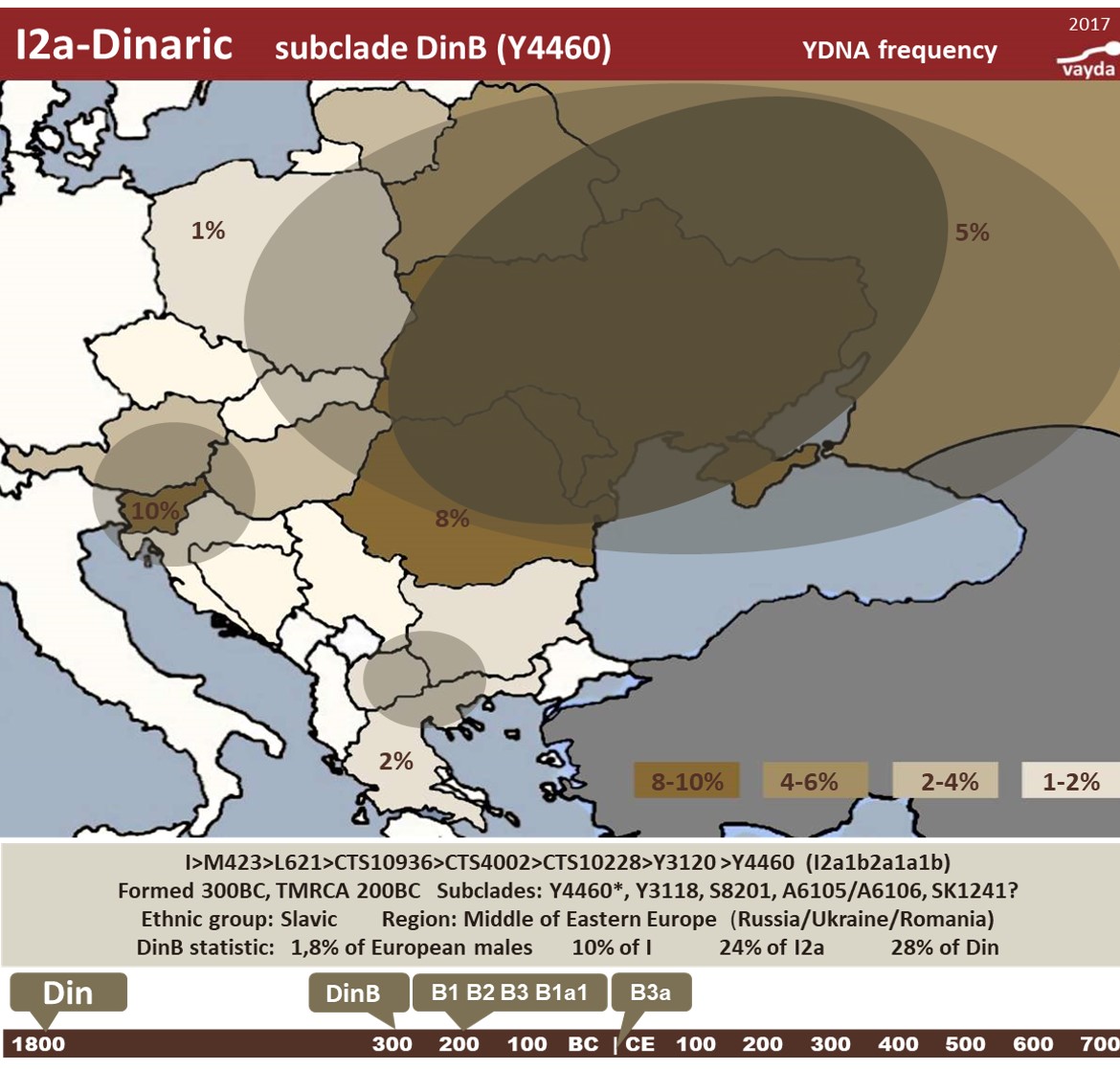 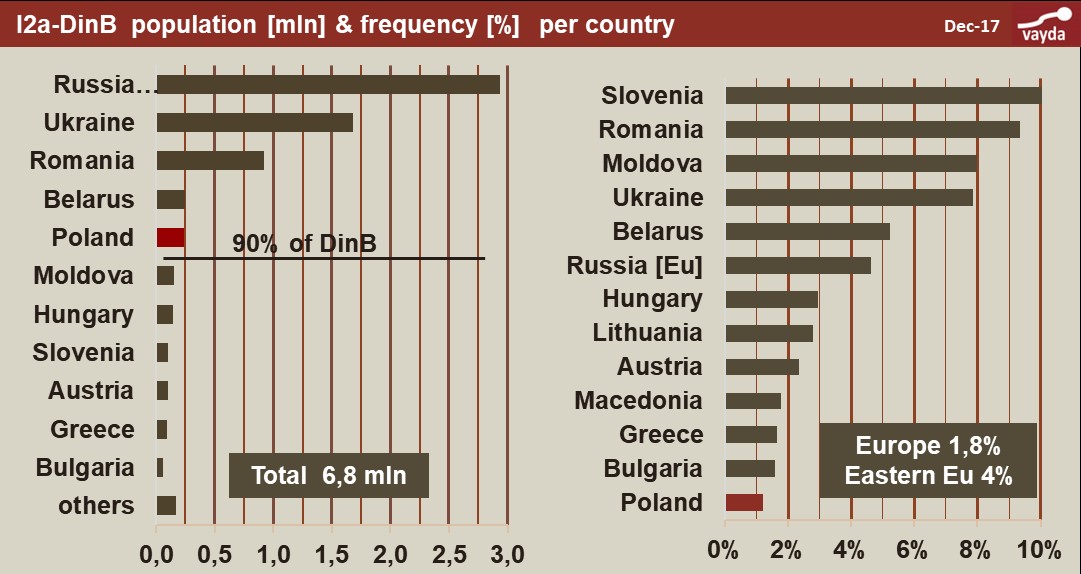 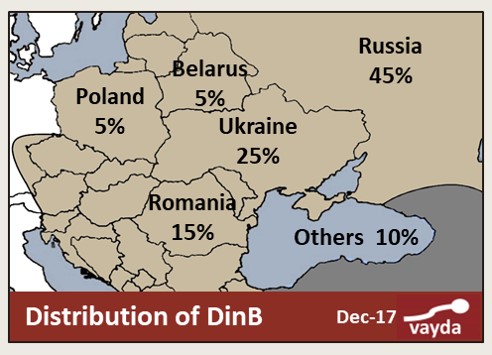 Haplogroup DinB (Y4460) is the second largest Dinaric haplogroup with about 7 million men, dominated by the inhabitants of Russia, Ukraine and Romania. These countries include the area of ​​the historic Black Sea steppes and perhaps this mutation was created there in the 600BC-50CE period. Several hundred years later, her subsequent mutations arose. The lack of sufficient DNA tests at this level, however, prevents their statistical analysis.

When drawing conclusions, demographic changes and migrations in the 20th century should be taken into account – within the framework of Tsarist Russia and the Soviet Union, as well as in Poland after the Second World War.

Large population, present mainly in Russia, Ukraine and Poland, and less in Belarus, Romania and Moldova. Geographically, it is a region from the Carpathians (including them) to the north and north-east deep into Russia. Therefore, it is scattered over a large area, but this is not surprising, because it is very large – about 4.5 million men. It is possible that the homeland of DinB1 is Ukraine, from where the genetic population migrated north (Polesie, eng. Polesia) and south (Romania).

Average population – about 0.7 million. There are relatively many DNA tests from Poland. Perhaps the homeland of this haplogroup is the area of ​​Polesia and Volhynia (pol. Wołyń) including the Pripyat basin. In the present polish borders it could have found itself in large numbers as a result of resettlements from the USSR after the Second World War. It can be associated with such peoples as Dregowchs, Drewlans and Radymichs from the 2nd half of the 1st millennium AD.

Average population – about 0.7 million. The lack of a clear territorial distinction prevails in Russia, Ukraine and Poland. It is possible that it also originates from Polesie.

Average population – about 0.5 million. There is not enough data to determine the area. 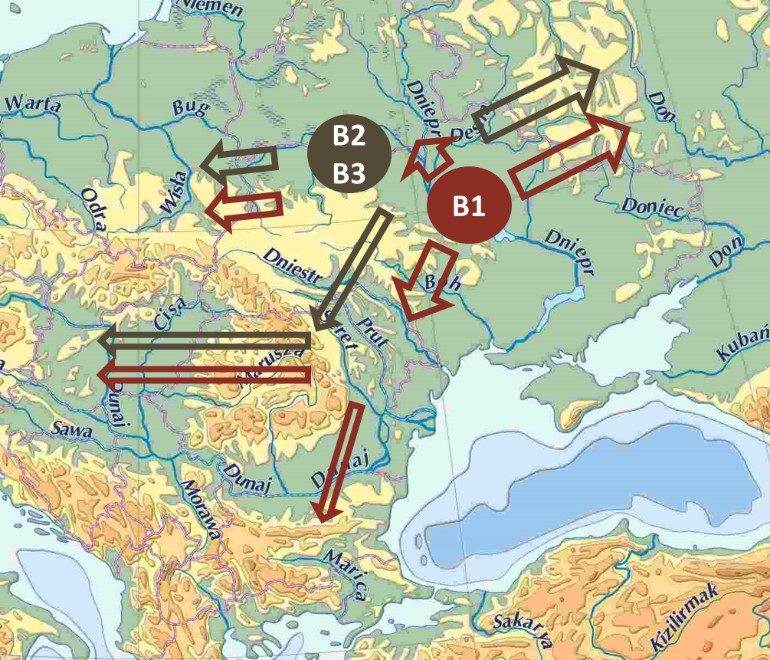 DinB is about 10% of the male population of Slovenia (about 100,000). Lack of tests for the Hg DinB subclades prevents the determination of the haplogroup specific to the Slovenes. Nevertheless, everything points to genetic migration from the north-east (Romania) to the Hungarian Plain, and then in two directions: Austria and Slovenia, as well as Macedonia, Bulgaria and Greece. This is confirmed by the low incidence of DinB in Slovakia and the Czech Republic.

In written sources, Dregowichs was mentioned for the first time by Constantine Porphyrogenet in the mid-ninth century. The name of the tribe comes from the words dragva, dreg-dreg’v – swamp, mud. They came to the lands of present-day Belarus in the second half of the first millennium from Volhynia. The borders of the Dregovichs territories were marked by rivers in the south of Pripyat, in the east of the Dnieper, in the north of Daugava and Nemunas, in the west of the Bug river. They were neighboring with Drevlans from the south (presumably a branch of Dregowichs from southern Polesia) and Dulebs, in the east with Radymichs, in the north with Krywichs and Jacvings (Jaćwięgowie), in the north-west with Mazurs (Mazowszanie) and Lendians (Lędzianami).

Radymichs lands were located on the river Soż. From the west and the north it was limited by the Dnieper, from the south and east – Dzisna river. To the west, Radymichs was adjacent to Dregowichs, to the north – to Krywichs, to the east – to Viatychs, to the south – to Severians (Siewierzanie). According to the twelfth-century Chronicle of Nestor Radymicze they came from Lachs, took their name from Lach Radym and settled on Soża: Polans (…) were a Slavic family, Drewlans (…) they came from these Slavs, Radymichs (…) – from Lachs. According to Lubor Niederlych Radymicze began their journey on the river Soż in the third century under the influence of the Goths or in the VI-VII century under the influence of the Avars. 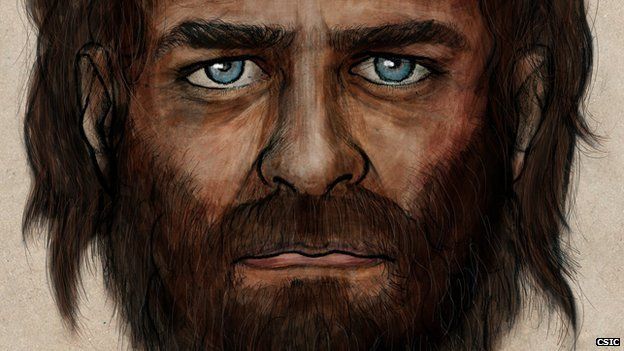